E found that early attempts at wandering through Paris and London were frequently thwarted by the irresistible pull of the iPhone Maps application. How could e follow the psychogeographical contours of the city when the multinational data gatherers had been there already, rendering the streets and boulevards hopelessly knowable and searchable? Leaving the technology at home seemed disingenuous; a desperate nostalgic hankering for a bygone age before mobile internet. The city was no longer accessed through physical routes alone, and e had to find a way to embrace this pandemic augmentation of the urban landscape.

Attempting to find the epicentre of the predictable city, e types ‘places to go in London’ into Google and picks the first unfamiliar location – Little Venice, where the Grand Union and Regents Canals meet to the north of Paddington. Alighting from the underground at Warwick Avenue, e wanders along the leafy streets and, as the sun sets, the sound of a six-piece blues band heralds the final hours of the Canalway Cavalcade festival – a fortuitously celebratory opening to a week’s e-drifting.

E drinks overpriced lager from a plastic glass and watches Chinese lanterns float away into the clear sky. Over a Tannoy, the wry compère announces a procession of illuminated narrowboats; an annual tradition that is cynically undercut by e’s judgmental use of a Rightmove application to ascertain local property and boat prices. Now, with the knowledge that e’s Glasgow flat is worth little more than the smallest of these vessels, the whole affair takes on a new light and a charming pageant becomes a grotesque parade of affluence.

Later, in a far less glamorous flat in Willesden Green, e trawls the internet for other Little Venices and stumbles across the website for the Department of Architecture at Berkeley University of California, where Professor Charles C. Benton blogs about his foray into kite aerial photography. E uses Benton’s photographs of the ‘Little Venice’ of Parc de la Villette in Paris as a real-world hyperlink, and two weeks later, finds the exact location of the spot where the kite camera captured a freight boat passing one of Bernard Tschumi's follies on the Canal de l'Ourcq.

Searching the web for information about the follies, e mostly finds drawings and plans, strikingly detached from the landscape, alongside photographs of the bright red structures taken from below, framed by nothing but clear blue sky. On foot, sauntering along the canal on the warmest day of the year so far, the park feels very different. The follies are distinct from their environment, but they also have a clear relationship with it. E moves over bridges, across well kept greens and up stairs - the whole site is a huge adventure playground. At the same time, e has never been in a place that feels so tangibly designed. People literally flow along the pathways, parallel and perpendicular to the waterway. This is the architecture of human behaviour as much as landscape; a clear reminder that most of the wandering that is done in the city was planned in an architect’s studio.

The same is true, of course, of the nineteenth century shopping arcades made famous to urban wanderers by Benjamin. E walks the length of one of these - Le Passage Choiseul - the following day and finds locked doors, boarded up windows and ‘to let’ signs. Perhaps this is a more direct example of the impact of the internet on the urban environment, as the explosion of e-commerce draws its strength from the closure of local, independent businesses?

Leaving the manmade waterways of the Canal de l'Ourcq behind, e traces the route of the Canal St Martin above ground towards the Seine. Surrounded by monumental architecture and urban order, the river offers a very different experience of wandering through the city. Here, the gothic splendour of Notre Dame and the vast architectural grandeur of the Louvre are juxtaposed with something more mysterious and untameable in the murky depths of a defiantly natural entity: the urban river, containing both ‘the real and imagined threats which unruly natural features represent to the civilised contemporary city’ (Donald, 2012, p.222). 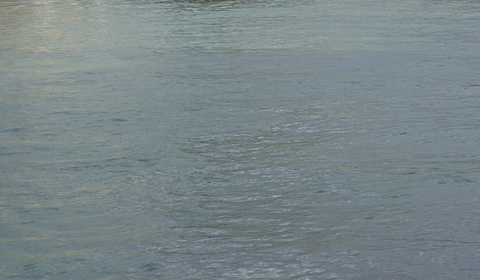 Standing on a bridge over the Seine, e uses an augmented reality programme to display information overlaid on the physical city. Recognising the shapes of buildings and monuments, a series of labels are generated that indicate the location of various tourist attractions. E is looking for an indication of where to go next, but there are no clear signs. Under foot, the river ripples in the sunlight. It is notably absent from the virtual data. This is the first point in e’s journey that the real seems to shut out the virtual. Perhaps that is why this whole e-drift has continually been drawn to water and guided by its routes. E stays on the bridge for a long time, trying to get a sense of the life of the river. The need to walk diminishes as the water moves things and people past this vantage point.

Returning to London, e spends some time staying on a houseboat in a floating community near Tower Bridge. For better or worse, e has missed the spectacular flotilla organised for the Queen’s Diamond Jubilee, but there is still plenty of evidence of celebration in the days following the event. In the mornings, e sits at a picnic table that was hauled out of the River Thames and given a new home on the bow of the boat. No online furniture store could have provided such an efficient delivery service.

Drifting along the South Bank, e stumbles across a world food market behind the Queen Elizabeth Hall. Eating a delicious Serbian kebab, e reflects on the global marketplace that has contained and defined this entire summer excursion: Google’s multinational corporation, operating from data centres in America, Finland and Belgium; cultural exchange of traditions and products - the Chinese lanterns; London’s allusion to Italy’s grand canals; the passage to France afforded by the Eurotunnel; the Jubilee celebrations of the commonwealth. Clearly, the global spaces of London and Paris extend far beyond their geographical boundaries.

Moving through virtual and physical realms over the course of these e-drifts, another realm had moved into focus, located in the prevalent processes of cosmopolitanism and globalisation. Beyond the intersection between the internet and the city, the rest of the world had asserted its constant presence. Journeys through this worldwide space could now take place both electronically (via kite aerial photography) and corporeally (via a delicious kebab). While these drifts raised far more questions than they ever could have hoped to answer, this seemed to validate this line of inquiry: to explore the connections between the physical and the virtual, to ask how we can work with and through them both to better understand the world in which we live. The next phase of the e-drift might have to reach further into this global realm.