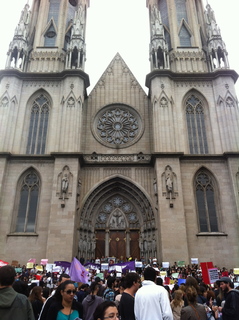 After a particularly uncomfortable and severely delayed two-day journey from Charleston to São Paulo, we slump down with a beer in a hotel bar and attempt to wind down. This is the reality of touring theatre – far from home, exhausted and disoriented, desperate for a drink. We have been travelling from place to place for almost three months now. For a few weeks in May I returned to Scotland to direct another play but Rob and Deanne have been on tour the whole time. As we adjust to our new surroundings, a television screen above our heads plays footage of police in riot gear closing in on a group of protestors. It looks like a scary and volatile situation.

Picking up on the clues of translation – a few familiar phrases and recognisable images – we soon realise that these scenes are unfolding as we watch and that we are only a few streets away. Nobody in the bar speaks English well enough to explain what is happening and our beginners Portuguese is limited to asking for directions and ordering food. Thankfully, smart phone technology brings Google to our aid. We learn that a few days before our arrival, the municipal government raised metro fares to 3.20 Brazilian reals – a raise of twenty cents (around five pence). This seemingly innocuous decision fuelled an emerging protest movement that rapidly spread throughout the country becoming one of Brazil’s largest protests in decades. From the clinical universality of airport lounges and hotel foyers, we have unwittingly stumbled into something real and urgent.

Later, from the safety of a hotel room with views over concrete tower blocks and building sites to Ibirapuera Park, I watch hundreds of people drift by on their way to the centre of the action. I decide to follow them but I soon feel out of place – an imposter in somebody else’s revolution. I see nothing of the burning cars and police brutality that is currently being streamed across the globe. Instead, there is a tangible optimism driving this mass gathering. Alongside political slogans and chanting, I see samba bands and dancers, balloons, costumes and masks. And everywhere, on walls, pavements, banners and clothes, the phrase ‘320 não!’. Someone holds up a sign, ‘Brazil Woke Up’.

At the Teatro Cultura Inglesa for the next few nights our potential audience is noticeably depleted. The theatre is not empty and our performance is well received but this is a very different experience to the tour so far. As millions take to the streets in a historically significant movement against the corruption of their government, we diligently plough on with a theatre show that we have performed countless times before in venues from London to New York. For now, we are culturally and politically disconnected from our environment. The real theatre is not happening in this building.